Asuma’s fire jutsu strikes Hidan, but much to the team’s surprise, Asuma is also burned. Hidan reveals his ability: By ingesting an opponent’s blood and standing in a ritual circle drawn with blood, the “curse” links him to his opponent and all damage inflicted on him is also inflicted on the opponent. Asuma rushes at Hidan but collapses after Hidan stabs himself in the leg. Shikamaru realizes Hidan needs to be in the circle for the curse to take effect, and uses his shadow possession jutsu to force Hidan to step out of it. Asuma forces himself to stand up and beheads the restrained Hidan. 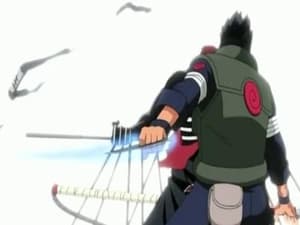