Naruto continues to get even more enraged and easily counters Kabuto’s attack, flinging him away. Naruto’s counter throws Kabuto into Sakura, knocking her unconscious. Orochimaru continues to watch Naruto become more enraged, eventually destroying the Bridge of Heaven and Earth. As the bridge collapses, Sakura slides off the edge. Sai draws a bird to fly, but chooses to follow Naruto and Orochimaru instead of saving Sakura. Yamato saves her at the last second, and creates a wood clone to catch up to the battle. Eventually the fourth tail appears, allowing the vile chakra to completely control Naruto’s body, forming him into a miniature Nine-Tailed Fox. 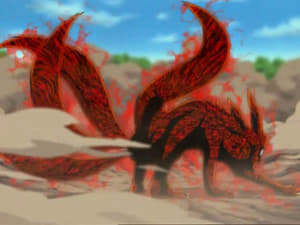