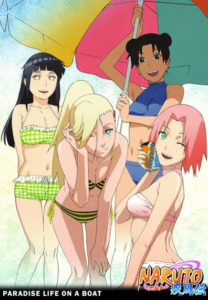 The episodes for the eleventh season of the anime series Naruto: Shippuden are based on Part II for Masashi Kishimoto’s manga series. The anime only season aired from July to December 2011 and follows Naruto sailing through the ocean. It was released on DVD under the name of Paradise on the Ship (船上のパラダイスライフ Senjō no paradaisu raifu) on March 7, 2012 by Aniplex. The episodes are directed by Hayato Date, and produced by Studio Pierrot and TV Tokyo. On January 2, 2009, Viz Media and Crunchyroll began providing the series’ subtitles. The season’s English version was streamed on Neon Alley from December 28, 2013 to May 17, 2014.