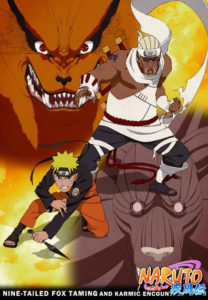 The episodes for the twelfth season of the anime series Naruto: Shippuden are based on Part II for Masashi Kishimoto’s manga series. It was directed by Hayato Date, and produced by Studio Pierrot and TV Tokyo. The season follows Naruto Uzumaki controlling the power of the Nine-Tails at the start of the Fourth Shinobi World War.

The season aired from January to August 2012. On January 2, 2009, Viz Media and Crunchyroll began providing subtitled episodes. The English version of the season aired for Neon Alley on May 24, 2014. The DVD collection was released on October 3, 2012 under the title of Nine-tailed Fox Taming and Karmic Encounters (九尾掌握と因果なる邂逅 Kyūbi Shōaku to Inga naru Kaikō). Episodes 248 and 249 were released together under the title of “Special Volume: Naruto’s Birth” (特別編 ~ナルト誕生~) on August 1, 2012. Episodes 257 to 260 were released on September 5, 2012 under the title of “Special Volume: Two Fates” (特別編 ~宿命の二人~).