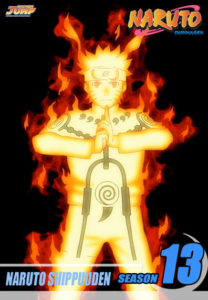 The episodes from the thirteenth season of the anime series Naruto: Shippuden are based on Part II of the setting of Naruto manga series by Masashi Kishimoto. The episodes are directed by Hayato Date and produced by Studio Pierrot and TV Tokyo. The season focuses on the Fourth Great Ninja War between Naruto and the Hidden Villages’ ninja against the forces under the masked ninja Tobi and Kabuto Yakushi. There is also a side story arc.