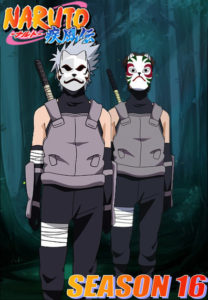 The episodes for the sixteenth season of the anime series Naruto: Shippuden are based on Part II for Masashi Kishimoto’s manga series. The season follows Kakashi Hatake spending years as a member of the ANBU Black Ops. The episodes are directed by Hayato Date, and produced by Studio Pierrot and TV Tokyo.

The season aired from February to May 2014. On January 2, 2009, Viz Media and Crunchyroll began providing subtitled episodes. The DVD collection was released on October 1, 2014 under the title of Kakashi: Shadow of the ANBU Black Ops (カカシ暗部篇 ～闇を生きる忍～ Kakashi Anbu hen ~Yami o Ikiru Shinobi~).