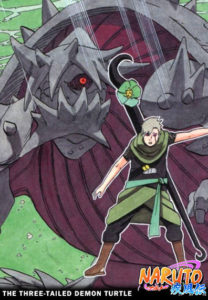 The fifth season of the Naruto: Shippuden anime series isdirected by Hayato Date, and produced by Studio Pierrot and TV Tokyo. They are based on Part II for Masashi Kishimoto’s manga series. The fifth season aired from December 2008 to June 2009 on TV Tokyo. It is also referred to by its Japanese DVDs as the chapter of The Three-Tailed Demon Turtle (三尾出現 Sanbi Shutsugen). A total of six volumes were published by Aniplex between June 3, 2009 and November 4, 2011. The anime only season follows the leaf ninjas attempting to stop the Three-Tails.